Writing is a long business.

It requires months, even years, to take an idea from being nothing more than wispy, ethereal concepts and mold it into an actual novel on paper. Then you have to polish that story again and again until it shines. And for those of us lucky enough to cross the bridge to the publishing side of things, you have a whole host of other milestones to accomplish before your story sees the light of day.

Then there’s all the waiting.

For the past year, I’ve felt as if my book was just hanging in the shadows, waiting to materialize. I knew it would happen, but “at some point” and not “sometime soon”.

Which is why it was a smack of reality to see the title of my book on the Carina Press website*. CmF clicked on the Coming Soon link and bam!, there it was. 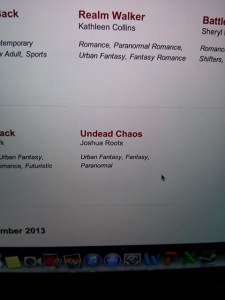 We stared at the screen for a few moments and all I could say was, “Huh”. Part of that was because I wasn’t expecting it. The other part was because it was the first, tangible proof that this thing was, in fact, going to happen.

By the time Undead Chaos hits the digital shelves at the end of October, it will have been five years in the making. Four of those were spent writing/polishing/shoving in a drawer/re-polishing, etc, and one was spent prepping it with Carina Press. It’s been a long road, but one that was made easier to travel thanks to the army of fantastic supporters, friends, and mentors. Because of them, the book is beginning to solidify from “dream” into “reality”.

And that’s nothing short of amazing.

*Feel free to check out the other great authors at Carina Press, either through this link or by following the link on the Books tab of this site.

3 replies on “Solidifying into Reality”

Just wanted to leave my email too. I’ve considered bees. Dad wants to do that next year. 🙂

Hi Josh, I googled you as I found a stack of old emails to each other while I was unpacking some things. I told my mom that it’s sad that we fall out of touch with people who were once so important. Congratulations on the book! And the beautiful wife! I’m going to have to find it in the bookstore now and sit and read it with a cup of coffee. Keep in touch in life. Congratulations on fulfilling a dream.