Tuesday was one of those weird days where I was in and out of meetings, scrambling to and fro with errands, wondering how I was going to squeeze in a run, and basically trying to keep my wits about me.

Then my friend Regan Summers e-mailed me this: “We can haz cover reveal?”

Apparently my book, Undead Chaos, went on pre-order through all the digital market places without me realizing it. I checked and sure enough, there it was with a little “Pre-Order” link.

And holy moley, that meant this whole writing-thing was actually real. All the years playing around with words, stumbling into the Cantina at Absolute Write, learning about beta readers, discovering I had no clue how to write a query letter, then dealing with submissions and rejections….

It all boiled down to this: 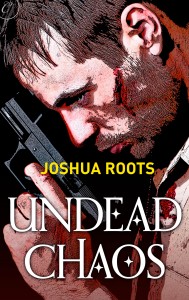 I’m not gonna lie, that is one sexy cover. Seriously, the Carina Press graphics art team did an amazing job. It looks so noir. Like a graphic novel of sheer badassery.

So, what’s it about, you may ask? Magic, zombies (okay, ONE zombie), action, humor, snark, and a taste of romance*.

I’ll admit, it was a heck of a lot of fun to write and I think my enjoyment translates to the page. Also, there are no throw-away characters. I put a lot of thought into each and every side-character, many of whom I have plans for in the future. Just FYI when you’re reading.

That said, I’m going to make you all a promise: ANYONE who reads Undead Chaos gets my heartfelt thanks and appreciation. You like it? Awesome. You don’t? Hey, that’s fine. I won’t harp on a single reviewer because everyone is entitled to their opinion. I’m thanking, in advance, each and every person who buys/reads this thing. Because putting my book into the hands of readers is literally a dream come true. You’re the reason why I love writing.

Anyway, Undead Chaos will be released on October 28th, but we’re live right now. That means you CAN pre-order it. So, you know, feel free to drop a couple bucks at your favorite online retailer (Amazon, B&N, Kobo, iTunes, GooglePlay, or even my own Books section).

*For MUCH better descriptions, I recommend checking out both Regan Summers and Tiffany Allee’s cover reveals. Partially because they are way more eloquent than I am and because they deserve some website hits for always having my back.