One of the great things about being a writer is meeting fellow writers who are, to put it plainly, amazing. That’s why I’m trilled to kick off these Author Interviews with one of my friends and fellow writers, Regan Summers. I’m a huge fan of hers and gobble up pretty much everything she puts onto shelves. I’ve also had the privilege of beta-reading for her and lemme tell you guys, this lady is one heck of a word-jockey.

So, without further ado, please help me welcome the one and only: Regan Summers!

JR: Welcome to the blog, Regan!

RS: Hi, Josh. Thanks so much for virtually hosting me. *eats your virtual food, peeks in your virtual closets, pets your actual cat*

JR: Oy, virtual guests. ANYWAY, let’s kick this interview off. For starters, you live in Alaska which is where your Night Runner series is set. Can you tell us a little bit about how your home has influenced your books?

RS: When I wrote DON’T BITE THE MESSENGER, I did so because I was being crushed by a particularly dark and frozen winter. I wanted to leave so badly, but couldn’t. So I wrote a character who could. Syd’s goal at the beginning of the story is to get the hell out of Alaska and away from vampires. Which brings me to the second way Alaska influenced me.

It doesn’t make much sense to me for traditional vampires – those that can’t tolerate sun – to live in places where they’d be in danger of being rousted and forced into the light. So my vampires, with some exceptions, migrate. Alaska’s ideal due to the long, dark winters. It was a little trickier finding a “summer” home for them, since the southern-most places on Earth are pretty sparsely populated. 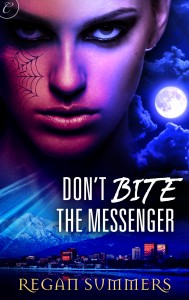 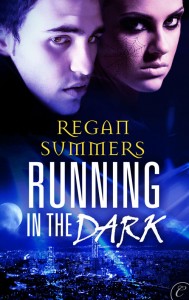 JR: Your use of locations (Alaska, Chile) brings a level of believability to the world of vampires. Speaking of which, your portrayal of the “species” is fantastic. I love how cold and creepy they are. What inspired you to make them so sinister?

RS: “Sinister” wasn’t on my agenda, but while I was working out the energy that sustains them – and Syd’s particular sensitivity to it – I fell back on the vampire as a creature of horror. They might be pretty and rich and integrated with human society in these books, but a lot of them don’t like or respect humans. At all.

JR: How about the characters, Sydney and Malcolm? They certainly have their issues, but also seem to have a great deal of chemistry. What can you tell us about them?

RS: Everything in Syd’s training tells her to steer clear of vampires, but she meets him before realizing he’s a vampire, which is a conundrum. What do you do when you like someone you’re supposed to avoid, who treats you better than any human man? You either take off, or go all in.

And Mal, poor Mal. He not all that good at being a vampire. They have hierarchies, power struggles, and very painful ways of punishing those who don’t adhere to their rules. He was a thief, living by the skin of his teeth and enjoying life to the fullest at every opportunity, until he was turned and forced into this strict world. He’s told himself that he’ll endure the next few years, until the master vampire who’s essentially enslaved him lets him go. And then he meets Syd, this fiery human who will tell him exactly what she thinks of him despite the fact that she has no obvious power or agenda. I think it’s refreshing for him, waking up parts of him that vampire society has been trying to snuff out for decades. I think there’s something to be said for the lover that allows you to be the person you want to be. And that’s what we have here. Syd allows Malcolm to be someone rather than a middle-tier cog in the vampire machine, and he becomes the first trustworthy person she’s ever had in her life.

JR: How much of “Regan” shows up in Syd?

RS: Ah-haahaahaa. She’s far more impetuous and physically courageous than I am, though her independence is rooted in my appreciation of the concept. Our speech patterns are quite similar, much to the torment of my copyeditors.

JR: What kind of challenges did you face when creating the Night Runner series? Anything specific to the genre or generic writing one?

RS: I love speculative fiction, so constructing and establishing the rules of a world is fun. Writing a series, however, has its difficulties. How much or how little of the backstory must be refreshed with the subsequent stories, and how soon does that need to happen? There’s an artificiality to sequels that you don’t get in the first story, I find, and it’s tough to balance background with forward momentum. Which, of course, is where editors come in.

JR: You also have a story in the Carniepunk anthology (which is fantastic, by the way). What in the world IS Carniepunk and how did you stumble upon it?

RS: Thank you so much! Yes, “Recession of the Divine” is written under the name Hillary Jacques. It’s a beautiful book, full of spectacular stories. Kevin Hearne, the amazing urban fantasy author, and I were chatting on Twitter one day and the word Carniepunk and something of the concept came up. Then Kevin embarked on this quest to make this anthology happen. Authors were invited and organized into this jazzed gang of carniepunkers. We drew up a proposal and got agents involved, and this crazy-fun thing sold to Simon & Schuster!

Technically, -punk literature is supposed to be subversive, pushing against or undermining, through form or content or style. While I find the carnival and carnival lifestyle somewhat transgressive, I don’t think we were consciously pushing for that (except maybe for Mark Henry with his disturbingly delicious “The Sweeter the Juice”). We just loved the way Carniepunk sounded and so, apparently, did the publisher. I’m so proud of the book, from the way it started to the stellar authors who hung in there, and hung together, through some difficult moments in the process. 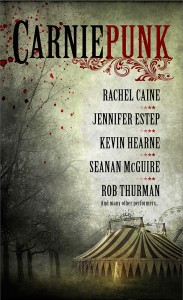 JR: What was it like working with an anthology? Were there a lot of differences with your writing process versus a novella/novel of your own?

RS: This wasn’t a collaborative anthology in the sense of a shared world or a really strict theme. It was open, with the understanding that some authors would be working within the worlds of a series, and other stories would be new. I tried so hard to write a Night Runner story for this anthology, but it never landed. Maybe because that world is so broad at this point that I tend to write longer episodes. Anyway, other than meeting a shorter word count than I’d anticipated, there wasn’t much different in my process. Except, of course, that this story would go up against those of New York Times bestsellers. NO PRESSURE THERE.

JR: Speaking of writing processes, what’s a typical “writing day” for you like? Are you a pantser or an outliner? Any special writing apps or programs that you can’t live without?

RS: I wish I could say that I drop into the zone like flicking a switch and have some uber-fantastic program that eases the process. But I don’t. I work full time and have a family, so writing is crammed in between 9 p.m. and midnight, and I write in Word. I outline loosely, and revise my outline when the story diverts in a major way from the prior version of the outline. I’ve heard Scrivener is great, and think it would be wonderful for edits, but…it scares me. Also, I’m impatient and it looks like a lot of learning.

JR: With your stories, do you find yourself starting with the characters first and building the world around them or do you start with the world and fit characters into it?

RS: I tend to start with a scene or a single line, and then loosely outline characters, conflicts and concepts. If I outline too firmly before I start drafting, I lose interest in the story. It’s like, eh, I know how that ends…on to the next thing!

JR: In addition to your Night Runner series and Carniepunk, any other projects in the works that you’re allowed to talk about?

RS: I’m revising a near-future science fiction novel right now that I hope will land somewhere soon, and have three first draft novels completed and waiting for me to return to them to polish. But, unfortunately, I’m not prevented from speaking about any of them just yet.

JR: Last question: What kind of advice do you have for would-be authors out there?

RS: Get the eff off the Internet. Seriously, right now. Turn it off. Live in the world of your story until you’re done writing it.

Thank you, Regan, for joining me today. For you readers out there, check her out with the links below. Also, if you haven’t picked up her Night Runner series and/or Carnipunk, you’re missing out. They are all great reads. 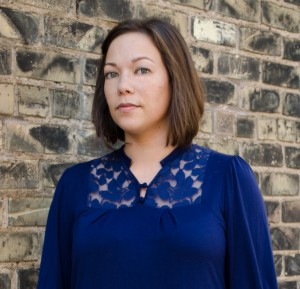 Regan Summers lives in Anchorage, Alaska with her husband and alien-monkey hybrid of a child. She is a huge fan of the low profile. Her Night Runner series, including Don’t Bite the Messenger and Running in the Dark, is available wherever e-books are sold.

PARANORMAL CHAOS released into the wild!