Like Loading...
Sadly, the girls didn’t make it through the winter.  It was quite a shock, too, because they seemed healthy going into late Fall, had plenty of honey stores, and the varroa count was low.  They even made it past the darkest, coldest months including some heavy snow storms in the Northern Virginia region.  The GF and I checked on them in late Feb and they were perfectly clustered, but two weeks later they were all dead.  I estimate there was approx 40 lbs of stored honey, but the cluster never moved into the stores (including frames in the same super as the cluster) and either died on the comb or with their heads in the cells.

Apparently there were many keepers in the area who suffered similar issues which makes me wonder just what is going on with the ladies.  Did they freeze to death?  Were they weakened because of the varroa battle in July and August?  Or were they just too lazy to move over/up to get to the food?

Figure out why our bees seem to be dying in the winter despite the presence of plenty of honey and few mites and you can make a lot of money. . .

The GF and I cleaned out the hive, found the queen, and froze the frames with honey on them.  The last events was an attempt to prevent wax moths, but we must have gotten to the frames a little too late because there was some webbing and tunnelling already in the comb.  We cleaned those out as well as we could and froze them.

Thankfully I was able to purchase a new nuc of Carnies from Pat and, around mid-May, picked up not only mine, but two nucs for the student (Stud) I’m mentoring.   Using some spare gear in the basement (and some extra stuff borrowed from Pat and Jim – thanks guys!) the GF and I fashioned two temporary hives.  Studs’ nucs were healthy with one billowing out the moment the GF and I opened the box and, as a testament to how great my partner in crime is, she didn’t flinch as we gingerly removed frames and slide them into the new supers.
My nuc was less than stellar with a surprising number of dead in the bottom of the box (see pic below).  I contacted Pat who said that the dead were well above normal and to let her know if they got worse, but the GF and I decided to give the weakened nuc a break and put them on drawn comb and two full supers of honey.  Thankfully they took to it like gangbusters and, with the combination of keeping the screened entrance reducer on, they seem to have recovered pretty well.  My guess is that they overheated because the dead had been that way long enough for ants to get in and feed on them, so they were not killed in the transfer from Pat’s to the beeyard. 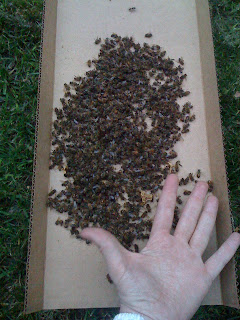 Two weeks later my Stud returned from his business trip and we coordinated the transfer from my yard to his.  We walked through his property to determine the best location for the girls and then headed to my yard.  It was late, after sunset at least, which was key to ensure that everyone was home inside the hive.

The first step to making the transfer was to seal the hive shut.  In order to accomplish this, I cut a section of wire mesh with an elbow bend and used heavy-gauge staples to affix it over the entrance.  This ensured the girls would stay indoors but allowed for air flow.  Next, we used ratchet straps (which can be purchased from Home Depot or Lowes for about $15 for a pack of 4) to clamp the supers together.  Of note, before ratcheting the hives, we slid the top cover “back” to seal the gap of the inner cover which prevent bees from escaping.  Once sealed and clamped, we each lifted a hive and placed into the bed of the Stud’s truck.  One thing to keep in mind is that the hives were only 2 supers tall, so they were light enough to lift on our own.  Moving a hive when there are more supers full of honey would require at least two people to lift since they are well over 100 lbs.  Something to keep in mind.

With the girls loaded, we headed to the Stud’s home and placed the hives on cinder blocks.  The Stud let the girls cool down (emotionally, that it.  It was hot and humid, so there was no cooling that night) and then removed the entrance screens so the bees would be free to inspect their new digs the next morning.  A week later he checked in on them and they seemed to be doing really well.  Building comb, raising brood, and generally happy in their new home.

As for my girls, they are also doing well.  I added another super (up to four now) and, since we are in the last major month of honey-flow in Norther Virginia, placed a queen excluder between supers 3 and 4.  Additionally, I removed the screened reducer since there were numerous foragers coming and going as well as a decent number of guard bees on duty.  The drawn comb with honey appears to have gone a long way to helping the weakened nuc recover and I plan to conduct a brass-task inspection within the next week or so.  Additionally, the GF and I will begin the powdered sugar mite treatment early (likely the beginning of July) in order to minimize the impact of mites.  This breed of Carnies are supposedly mite-resistant (i.e. self-cleaning and will removed “infected” brood), but we’re not taking any chances.

Wrap Up:
Lessons Learned from moving the hives:
1) Move hives at night.  This ensures everyone is home.  It also decreases the coming and going of foragers.
2) Entrance screens are easy to make from wire mesh.  They are also easy to attach (will ad photos later).
3) Ratchet straps are easy to attach in order to clamp the hive supers together.  This allows you to move the hive without fear of separating the supers.
4) “New” hives (i.e. bees still drawing comb) are light enough to move by yourself.  Larger hives with more drawn comb and honey will need at least two people.
5) After moving the hives, give the girls an hour or two before removing the entrance screen.  In all honesty, you can probably remove the screens immediately, but a little cool-down period ensures that you don’t have any disturbed ladies coming to greet you.
6) General Tip: Order gear early!  Wooden ware for hives, and even a lot of keeper gear, will wind up on back-order by March.  The ideal time to order is in the fall/winter since items are in stock.  Things can get complicated if you  order bees but have to scramble to “create” hives for your bees because the wood hasn’t shipped.  Planning ahead saves you, and your girls, a lot of panic.